The managed real estate market grew to $10.5 trillion by the start of 2021 (MCSI, 2021), despite a year of unprecedented challenges. The market has grown [160%] since 2010 and, as you would expect, digital transformation has gathered pace to keep up with the opportunities and challenges presented. 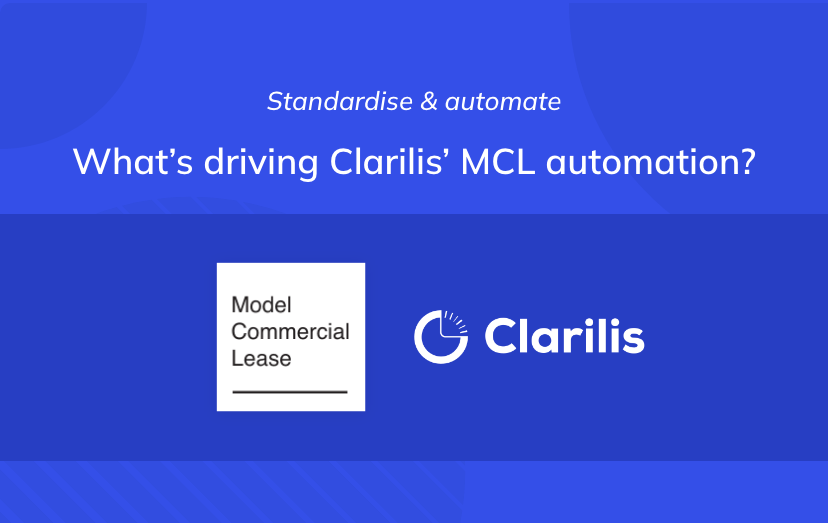 Standardise or automate? Why not both?

Automation and standardisation both have the potential to reduce lawyer effort and streamline legal processes. But what happens when you combine the two? At Clarilis, we’ve taken the standardised Model Commercial Lease (MCL) and created a suite of pre-automated lease documents to give law firms of all sizes access to ‘best-in-practice’ content in an off-the-shelf format.

At a recent Clarilis webinar, we invited two of the architects of the MCL – Tim Cooper, Legal Director at Landsec and Dion Panambalana, Real Estate partner at Hogan Lovells – to talk about their experiences of this milestone standardisation project. We share some of the highlights from the discussion here to show why standardisation is such an ideal partner for automation.

Tenants, landlords and lawyers – all parties involved in a lease transaction are equally invested in getting signatures on documents as swiftly as possible. The problem is lease negotiations, even though they’re often routine, usually start with a time-consuming tension between landlord and tenant over the type of lease.

The MCL project created a high-quality suite of 19 standardised leases. This provides an agreed set of base lease terms with all the outdated, superfluous clauses stripped out and most immediately accepted concessions included.

“You can take the MCL and not really amend it very much apart from what you need to do to adapt it for the property and the specific deal,” Dion says. “We very much view it as a fair starting point.”

In short, standardisation and automation share a common goal of speeding up lease transactions by reducing the need for lawyers to make the sort of amendments which are typically accepted immediately.

What motivated the MCL project?

At our MCL webinar, Dion and Tim explained what motivated them to undertake a standardisation project of such a huge scale in the first place? What emerged were two key frustrations with existing lease documentation.

1. Every law firm was using their own version of a lease
“Landsec’s journey with standardisation started 15 plus years ago,” Tim explained. “Various forms of lease were being used by our panel firms and we got a lot of feedback that it was frustrating from an occupier’s perspective to be presented with these very different documents.”

This was a common frustration across the real estate sector even 15 years ago, but the issue was mobilising the property industry to come together and do something to change this. Tim and Dion both referred to a meeting of the commercial committee at the British Property Federation ten years ago as a key moment when the focus shifted to starting the standardisation process.

“Can't we put everything in the same place? Can't we agree that if we've got a repair clause that does this, this is the wording we’ll use? Can we not make life a little bit easier?” Dion recalls as some of the frustrations expressed at this the meeting back in 2012. “These were all questions we’d asked many times over the years, but this time it got a big yes in the room and gained traction. Everybody thought, ‘okay, let's give it a go’.”

The decision was made to standardise commercial leases. A cross-industry committee formed and together they embarked on a mammoth mission to take all the leases circulating and create a single set of agreements built around industry-agreed, best-practice lease terms.

2. Leases are traditionally drafted heavily in favour of the landlord
Historically, leases have always been drafted to be inherently – arguably unnecessarily – confrontational. The team behind the MCL challenged whether this approach works in today’s market.

“When I started out, the landlord-tenant relationship was adversarial,” Dion recalled. “Most deals I do now are collaborative, and you're not looking for an adversarial position.”

The MCL committee found most of the documentation in circulation jarred awkwardly with this shift in the landlord-tenant relationship. Most leases were still skewed to favour the landlord in a way that would produce prolonged and sometimes tense, time-consuming negotiation.

“I have been acting for large landlords for many years now and you realise pretty quickly that there are certain things in leases that you “require” for no good commercial reason,” Dion said.

Tim continued “We made a conscious decision to pitch the MCL to be acceptable to the institutional investor, rather than giving the landlord vast amounts of control. It means the MCL works for everyone. And if not, people are free to amend it as they see fit.”

So, an important part of the MCL project was tackling the landlord bias typically written into commercial leases.

“The result is, it's not a tenant friendly document, but it's not a landlord friendly document either,” Dion said. “We went through and looked at all the clauses in leases that typically get struck out or amended by a tenant and on which the landlord typically agrees without a murmur. We thought, if we're constantly allowing all these clauses to be amended like this, let's just start from that place.”

By creating the MCL in this way, less time and cost is now squandered arguing for the same routine tenant amendments again and again. Instead, lawyers can focus on the building and the deal and not the never-ending rabbit hole of what-ifs.

The ideal launchpad for our automation

It’s important to emphasise the MCL gives property lawyers a genuine standard – it’s not a template. Why is this an important distinction to make? Because the MCL wasn’t created to meet the agenda of a single law firm or party, it’s the end result of years of blended input from a committee of legal professionals and the wider property community.

“Nothing was taken as read – we tested every clause debating fundamentally why are these provisions in here?” Tim explained. “It took a big effort from many law firms on the committee to do this and we also had a lot of feedback from people within other law firms and from their clients as well as specialists on specific areas. There was robust discussion before launching, and since the launch we continue to receive and actively debate changes. We’ve been very clear we’re not trying to lead the market – we’re reflecting market practice.”

And then along came the Clarilis automation…

Drafting the MCL by committee was a painstaking process but it created the ideal launchpad for us to use to build a pre-automated lease package. To find out more about the MCL automation project, click here.

The managed real estate market grew to $10.5 trillion by the start of 2021 (MCSI, 2021), despite a year of unprecedented challenges.