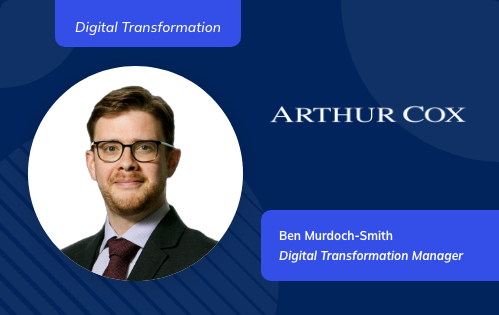 Rigour, not speed, is the key to launching a successful automation strategy

Every day, we personally make choices about technologies that we hope will make our lives easier in some way. Sometimes we rush in and make bad choices – whether it’s selecting the wrong broadband provider or downloading an app that fails to deliver the promised benefits.

Unfortunately, the same happens in the business world but the consequences of poor LegalTech decisions are often significantly more costly (both financially and strategically).

At Clarilis, we’re keen advocates of a rigorous vendor selection and implementation process. And for this reason, we were particularly bowled over by the thorough approach leading law firm, Arthur Cox LLP, took when defining and delivering its document automation strategy.

Arthur Cox LLP is an ambitious law firm, with an international client base and a presence in Ireland, London, New York and San Francisco. Technology and innovation are important aspects of the firm’s growth strategy. Clarilis first started working with Arthur Cox LLP in summer 2019. Now, more than 2 years on, and with our automations now firmly part of the furniture at the law firm, we asked Digital Transformation Manager, Ben Murdoch-Smith, to take us through the thinking behind their automation strategy.

From our experience, as the successful vendor in the Arthur Cox LLP automation technology selection process, we identified 6 critical elements that stood out to us in the firm’s approach.

We now turn to Ben to elaborate on how this worked on the ground, from a law firm’s perspective.


1. Backing of a senior project sponsor

Arthur Cox LLP recognised the importance of having a senior, influential stakeholder driving forward its automation ambitions from day one. Automation projects fail to deliver their full potential when they are side-lined as ‘IT projects’. The reality is your lawyers are more likely to buy in to automation if there’s lawyer ownership of the project.

“If you want your project to be successful and have an impact, you need to get someone – a senior stakeholder – who's going to sponsor that project and help make it a success,” Ben states resolutely. “Only once we got that buy-in, did we start thinking about the strategy itself.”

Where projects have no defined purpose other than ticking an innovation box, they’re destined to under deliver. However, innovative firms, like Arthur Cox LLP, have become highly skilled at embarking on projects with a clear ‘what’, ‘why’ and ‘who’.

“It was important that we understood our own needs and that we could articulate what those needs were,” Ben says as he explains their project initiation process. “We started by drawing up a project charter, which helped us to understand and state to the business what it was that we were trying to achieve. By doing this, we could then ensure that those needs could be met by the vendors that we were engaging with.”


3. Initial filter of vendors for fit

With so many LegalTech vendors offering automation solutions, even getting to a shortlist can feel like a formidable task. Arthur Cox LLP created a more manageable shortlist by initially focussing on some mandatory requirements that ensured they were working with vendors that shared their values.

“We make commitments to our clients around information security, and the vendors we engage with have got to meet or exceed those commitments as well,” Ben explains. “For any SaaS – software as a service – vendor that we engage, we have a questionnaire that runs through a wide range of criteria on information security, data retention, backups, all those kinds of things. We want to make sure that the vendors we engage with are as robust and have the same security in place that we do for our own data.”

Once you have a vendor shortlist, what’s next? Some firms we work with, like Arthur Cox LLP, take the additional step of piloting a range of automation solutions first with a test group.

“After doing some initial research into the world of document automation, and all the various tools and approaches that were out there, we realised there were several different options we could pursue,” Ben recounts. “We wanted to make sure that we weren't artificially limiting ourselves by looking at a selection of vendors that approach things in one way. So, we selected a shortlist of three vendors. And then we established pilots with each of them.”

Each vendor selected was asked to automate the same document, allowing the different technology to be tested in a like-for-like scenario.

“We built a relationship with a specific practice group, who we wanted to engage consistently with throughout the selection process,” Ben says. “We let these lawyers have hands-on access to automation for a period of weeks. I think we were able to make better decisions by being able to talk to lawyers after they experienced this hands-on comparison.”

Arthur Cox’s informed and realistic perspective about what was involved in the long-term automation process, was a key part of the programme’s success.

“First of all, there was selection, we had to find technology and a vendor that was going to help us with our automation efforts,” Ben recalls. “But once we got that vendor in place, we knew we would need to run a series of projects to automate documents or suites of documents – they weren’t going to automate themselves. And finally, there was the governance of these projects and the vendor to consider.”

Selection, implementation, and governance ¬– these three elements were incorporated into the firm’s document automation programme, and this had a big influence on their decision to opt for the Clarilis managed service.

“We realised for us, the managed service approach would make a lot of sense – it would help us get up to speed faster, and realise value faster,” Ben reveals. “One of the challenges with the self-service approach, where you just get a toolkit, is that it would require us to build a lot of knowledge internally, at cost, before we could use that tech productively.”

And it wasn’t only the initial investment in building expertise that made the Arthur Cox LLP team wary of self-service. They also identified the potential for bottlenecks in the future.

“We could see that as soon as you have a certain number of automations in play, then all of your developer time is going to be spent maintaining existing automations and not having capacity to build new ones,” Ben goes on to explain. “The team would have had to grow over time. Once we looked at potential costs, time, skill, and resource we would need to build internally, we realised it made much sense to take the managed service approach – that way, there's no additional costs that you have to worry about trying to budget for.”


6. Measuring the real return on investment

Automations over time can start to derail if their value isn’t fully understood, measured, and maintained.

“We look at the amount of time we save but having time itself doesn't give you a return on investment,” Ben goes on to explain. “There must be a second step – what can you do with the time gained? It might be business development, it might be CPD, it might be allowing someone to get home at seven o'clock instead of 10 o'clock.”

The ongoing governance of their automation programme helps Arthur Cox LLP to understand and make sure they’re realising the true ROI of automation. This value extends from improving the well-being and morale of lawyers to increasing margins and market competitiveness.


Do you need help choosing the right LegalTech vendor?

When it comes to selecting the right technology partner for your business, the process can be daunting. What if you invest a whole lot of time, money, and effort into a new LegalTech platform, but you don’t end up with the solution you need?