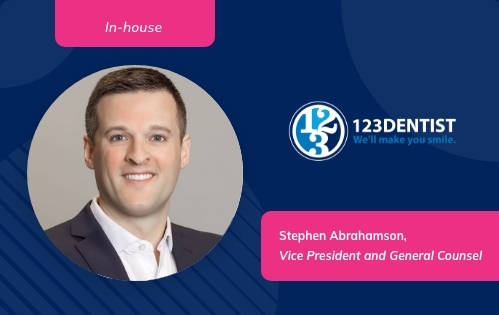 One of the most compelling incentives for in-house legal teams to invest in automation technology is the potential to vastly increase deal capacity, without increasing headcount or compromising the quality of output. This was definitely the case for Clarilis client 123Dentist.

Shifting to a self-service mindset

123Dentist is one of the fastest growing dental support organizations in Canada. Starting as a single clinic in 1993, it now stretches across more than 425 locations and employs more than 5,000 people. This rapid growth trajectory continues to accelerate. With a highly acquisitive business model driving the business’ growth, Stephen was given the task of building an in-house legal function to help them complete more deals, more efficiently.

“We are growing exponentially, so we need to get deals done efficiently,” says Stephen. “When I joined 123Dentist, in-house legal was a one-person operation. As we were expanding quickly, we ended up hiring people every few months, but we could see at a certain point that capacity would run out and our lawyers would lose interest in the more repetitive work.”

Continually adding to legal headcount was also a costly way to resource what was often recurring work. So, he began to explore how he could reduce the strain on the legal department by using Legal Tech to delegate routine drafting to the business’ operational departments.

“What we really wanted to do was figure out how to automate the repetitive tasks that were coming in, and then empower the responsible functional teams to take on those tasks. The key to doing that was for the legal function to control the documentation from a quality perspective, but then for it to be used by other departments.”

He identified two areas as prime for automation. The first was the drafting of letters of intent (LOIs). A key ambition for the automation project with Clarilis was to enable the 123Dentist corporate development department to produce high quality letters of intent, efficiently and at scale.

“These are documents that usually follow the same form and don't materially change a lot, but they are high frequency,” Stephen explains. "With Clarilis, the corporate development team can create them in a fraction of the time. Getting an LOI out quicker means we can get a deal signed up efficiently, which is important in our competitive industry.”

The second area was speeding up the production of associate services agreements (ASAs) to make the onboarding process more efficient and consistent across all locations. Delays and discrepancies in the recruitment process could result in the loss of talent. It was recognised that documents need to be consistent across all 123Dentist locations, and be turned around in under 24-hours.

“We were at risk of losing good candidates because (a) our contracts were not consistent, (b) they were not executed in time, and (c) there was not a formal process in place,” Stephen explains. “Previously, there was a delay in getting the agreement drafted. With Clarilis, we are now getting ASA documents out the same day.”

Stephen has now successfully introduced a self-service culture across key operational departments. But initially he faced some resistance from other functional areas who were concerned about their ability to take on these tasks.

“My colleagues were concerned that any wrongdoing or misstep in these contracts could be really harmful to us,” Stephen explains. “Particularly with the associate services agreements for dentists that are directly related to the company’s revenue.”

To get buy-in from the business, Stephen needed complete certainty around the quality of the automation before giving other departments free rein to generate documents themselves.

“The service piece is the secret sauce you get from Clarilis,” Stephen says. “Most of the other automation offerings out there that we explored only focused on offering the technology piece, not the service on top of that. For me, I think the service piece is equally important. We need a lawyer working with us on the other side to consult with, and for them to translate what we want into the tech. I think that has really been the most successful part of the Clarilis story for us – we have confidence that the documents that we are drafting are high quality and are being executed efficiently.”

123Dentist had a clear goal for its automation strategy – streamlining legal processes to enable them to complete more transactions and fulfil its quest to scale the business at speed. But what they didn’t anticipate was the wider benefit of this project of opening up the potential for a greater use of the technology in other areas of the business.

“I think Clarilis started a lot more conversations around what kind of tech we could be using in our business to improve our operational processes.”

So, in addition to increasing deal velocity and retaining talent both inside and outside of the legal department, it's great to hear how using Clarilis has provoked a shift in mindset that’s generating more excitement and openness to technology at 123Dentist. To see how Clarilis can generate results that will ignite enthusiasm for technology in your business, talk to us now.

Rigour, not speed, is the key to launching a successful automation strategy...