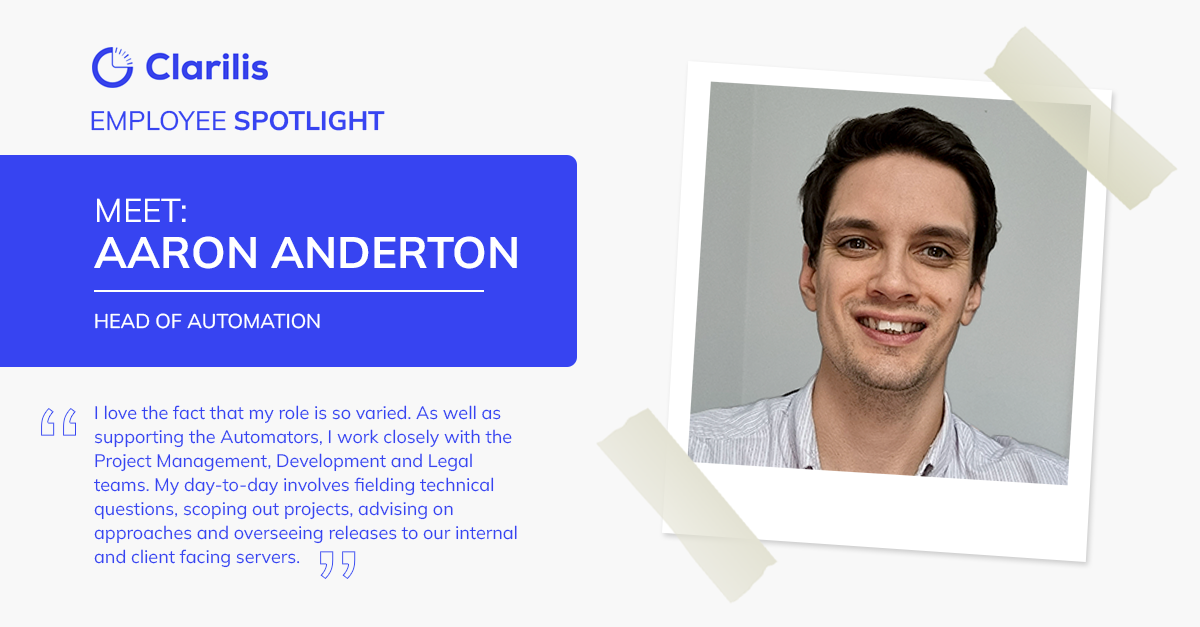 What is your role at Clarilis?

I lead the Automation team and I love the fact that my role is so varied. As well as supporting the Automators, I also work closely with the Project Management, Development and Legal teams. My day-to-day involves fielding technical questions, scoping out projects, advising on approaches and overseeing releases to our internal and client facing servers.

What do you like the most about working at Clarilis?

Firstly, the people, we have a closely knit team and everyone works hard for each other. We have great comradery which creates a warm and friendly atmosphere. Secondly, the challenge, each day is different with new and exciting aspects to tackle each day. Finally, knowing what we do offers a benefit to other people.

What did you want to be when you were growing up?

A beekeeper, I had a fascination with bees, I would attempt to pick them up which often led to one or two incidents. When I was slightly older, I liked receiving parcels, so I decided that I wanted to be a postman. Eventually, I realised that I would be delivering the parcels and not receiving them which is not as fun. Some years later, I was introduced to coding and went into computing. Perhaps when I retire, I could keep bees and be a part-time postman assuming the postal service is not automated by then.

What have you always wanted to try but haven’t?

Skiing, I’ve not had the opportunity to ski but it looks fun

If you were stuck on an island, what three things would you need to have with you?

[Sensible] things:
1. A crafting knife so I could make/build useful things.
2. Some sort of netting to stop me from getting bitten.
3. First aid kit and by that, I mean rum, I believe it can be used as an antiseptic and has other healing benefits.